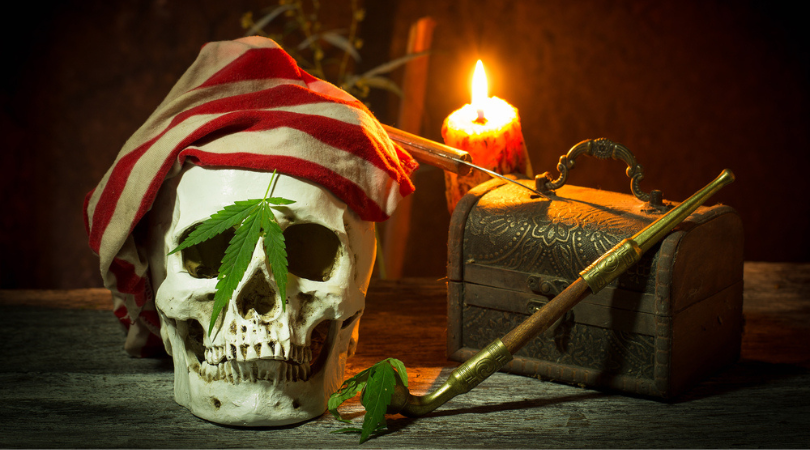 BACK
6 min Read
The Team

Looking for cannabis-themed Halloween costumes? If you want to impress your smoking buddies and celebrate one of your favorite hobbies, there are tons of great ideas to choose from. Many of these costumes can be made with some D.I.Y. magic or even bought from costume shops.

You might want to go as a classic stoner comedy character, or maybe you want to dress up as one of your favorite cannabis products. Whichever way, we have some great options for you to consider - there are even some cannabis-themed Halloween costume ideas for couples. Here are some of the best Halloween costumes for cannabis lovers.

Want to go as one of the most beloved stoner characters of all time? If so, consider dressing up as “The Dude” from Big Lebowski. Not only is this costume idea sure to get a positive reaction from fellow stoners, but it’s also extremely easy to pull off with a patterned cardigan, pajama pants, and a t-shirt.

You can add the finishing touches to your costume with a pair of sunglasses and a glass of White Russian. Plus, if your smoking buddies want to coordinate their costumes with yours, they can dress up as Walter and Donny - The Dude’s bowling buddies.

If you’re a fan of food-themed Halloween costumes, then you might want to consider going as a pot brownie. While you can find costumes shaped like cakes or brownies online, this costume is also easy to make with a little D.I.Y. - just grab a brown t-shirt or dress, cover it in colored dots to represent sprinkles or smarties, and maybe add a weed leaf to get the message across.

Of course, this isn’t the only classic weed edible you can dress up as. You might want to dress up as a gummy bear and tell people you’re a weed gummy. Your friends could even dress up as gummy bears in other colors. You could also dress up as a cannabis chocolate bar. Grab some cannabis edibles and you’ll be the most popular guest.

Looking for a good cannabis-themed Halloween couples costume, or even an idea for you and a friend? If so, you might want to dress up as the legendary stoner duo Jay and Silent Bob. This is another costume idea that’s easy enough to make simply by buying a few items of clothing, although you can likely also find Jay and Silent Bob costumes online.

You could also consider other stoner duo costumes if you’re going with a friend or partner. For instance, you might want to dress as Cheech and Chong, Harold and Kumar, or even Abbi and Ilana from Broad City. All of these costumes are simple enough to make yourself and are sure to make an impression on other cannabis lovers.

Although they’ve never been explicitly linked to weed, Shaggy and Scooby-Doo have become icons for stoners. Aside from Shaggy’s chilled-out attitude, his perpetual munchies and tendency to talk to his dog have caused many stoners to relate to him. Plus, attending a Halloween party as Shaggy is as simple as growing some stubble and wearing a green t-shirt.

This is also another great idea for couples or friends. If you dress as Shaggy, your friend or partner can grab a dog costume and attend the party as Scooby Doo. If you’re going with a group of friends, they can even dress as Fred, Velma, Daphne, and other classic Scooby-Doo characters.

Wanna get high? One of the greatest Halloween costume ideas for cannabis lovers is Towelie from South Park. Dressing as a towel is easy enough, and all you’ll need to do is tell people “don’t forget to bring a towel” if they’re not sure who you are.

Other South Park characters can also work well as Halloween costumes. Randy Marsh is another top idea for stoners, but even if you want to dress as Cartman, Kyle, Stan, or Kenny, your smoking buddies are likely to love the idea.

If you want a more offbeat idea that’ll instantly get the point across to cannabis lovers, you might simply want to dress as a weed leaf. You can find plenty of pot leaf costumes online and there’ll be no question about what you’re dressed as. This is another top Halloween costume idea that’s sure to get a good reaction from other pot lovers.

Plus, if you don’t want to dress as a leaf, you can also incorporate marijuana leaves into other costume ideas. For instance - want to go as Adam and Eve with a friend or partner? Cover yourselves with weed leaves instead of regular leaves. You could also dress as an angel with a cannabis-leaf halo or a Roman Emperor with a pot-leaf wreath.

Another great Halloween costume idea for cannabis fans is to dress as a joint. You might be surprised at how many joint and spliff costumes you can find from sites like Amazon, but this is another costume idea that’s easy enough to make yourself with a white sheet and some creativity.

It’s a fun costume that’s sure to make your smoking buddies laugh and attract any fellow stoners. Plus, if you want to represent your costume in style, you could even buy some cannabis pre-rolls to take to the party.

Cannabis dispensaries are becoming increasingly popular and, as such, cannabis doctors and nurses have now become commonplace. Since doctors and nurses are one of the most traditional Halloween costume ideas, you might want to take it to the next level by dressing as a marijuana doctor or nurse.

This is another costume idea that’s easy to pull off - just combine a regular doctor or nurse costume with some cannabis leaves or other cannabis-themed props. You can make it funny, stylish, or sexy, whichever way, this is one of the best Halloween costume ideas for weed lovers.

Whether you’re attending a Halloween party or simply hanging out with your favorite smoking buddies, these are some of the best cannabis-themed Halloween costume ideas.

Looking to stock up on cannabis products for Halloween? Our Lake Merritt, Oakland dispensary is ideal for cannabis users in California. Residents of Maine can also check out our Portland, ME dispensary. For more information on our products and dispensaries, visit Rose Mary Jane.